If you found your way to this file without reading more basic DART help files, please read those first. $DART/README.md is a good place to find pointers to those files. This document gives specific help in setting up a CESM+DART assimilation for the first time. Unless you just came from there, also see the ../{your_model(s)}/model_mod.html documentation about the code-level interfaces and namelist values.

Most other models are either called by DART (low order models), or are run by DART via a shell script command (e.g. WRF). In contrast, CESM runs its forecast, and then calls DART to do the assimilation. The result is that assimilation set-up scripts for CESM components focus on modifying the set-up and build of CESM to accommodate DART’s needs, such as multi-instance forecasts, stopping at the assimilation times to run filter, and restarting with the updated model state. The amount of modification of CESM depends on which version of CESM is being used. Later versions require fewer changes because CESM has accommodated more of DART’s needs with each CESM release. This release of DART focuses on selected CESM versions from 1_2_1 onward, through CESM2 (June, 2017) and versions to be added later. Using this DART with other CESM versions will quite possibly fail.

Since the ability to use DART has not been completely integrated into CESM testing, it is necessary to use some CESM fortran subroutines which have been modified for use with DART. These must be provided to CESM through the SourceMods mechanism. SourceMods for selected versions of CESM are available from the DART website. They can often be used as a template for making a SourceMods for a different CESM version. If you have other CESM modifications, they must be merged with the DART modifications.

These have been exploited most fully in the CAM interfaces to DART, since the other components’ interfaces still use older CESMs. The cam-fv/shell_scripts can be used as a template for updating other models’ scripting. The multi-cycling capability, with the short- and long-term archivers running as separate jobs at the end, results in assimilation jobs which rapidly fill the scratch space. Cam-fv’s and POP’s assimilate.csh scripts have code to remove older and unneeded CESM restart file sets during the run. All of DART’s output and user selected, restart file sets are preserved.

DART’s Manhattan release includes the change to hard-wired input and output filenames in filter. Cam-fv’s assimilate.csh renames these files into the CESM file format: $case.$component{_$instance}.$filetype.$date.nc. DART’s hard-wired names are used as new filetypes, just like CESM’s existing “r”, “h0”, etc. For example, preassim_mean.nc from a CAM assimilation named “Test0” will be renamed Test0.cam.preassim_mean.2013-03-14-21600.nc The obs_seq files remain an exception to this renaming, since they are not in NetCDF format (yet).

CESM can be configured with many combinations of its components (CAM, CLM, POP, CICE, …) some of which may be ‘data’ components, which merely read in data from some external source and pass it to the other, active, components to use. The components influence each other only through the coupler. There are several modes of assimilating observations in this context.

The first, and simplest, consists of assimilating relevant observations into one active component. Most/all of the rest of the components are ‘data’. For example, observations of the oceans can be assimilated into the POP model state, while the atmospheric forcing of the ocean comes from CAM reanalysis files, and is not changed by the observations. A variation of this is used by CAM assimilations. A CAM forecast usually uses an active land component (CLM) as well as an active atmospheric component. Atmospheric observations are assimilated only into the CAM state, while the land state is modified only through its interactions with CAM through the coupler. Each of these assimilations is handled by one of $DART/models/{cam-fv, POP, clm, …} If you want to use an unusual combination of active and data components, you may need to (work with us to) modify the setup scripts. 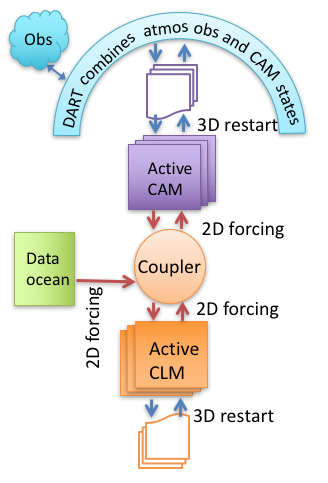 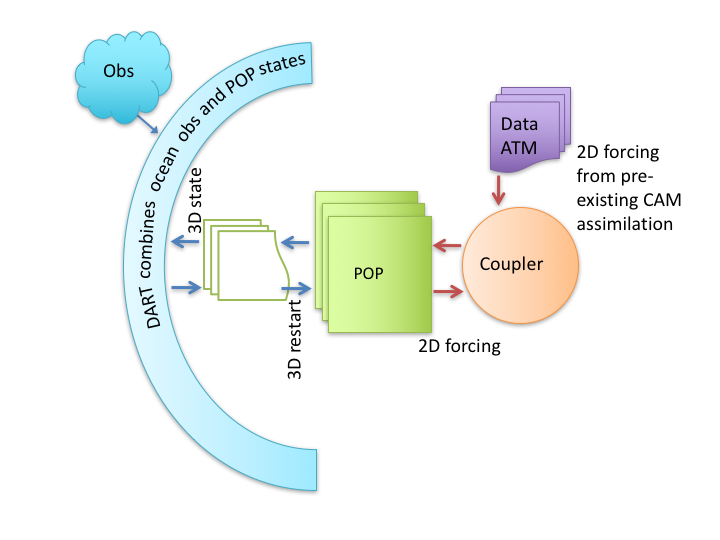 For each CAM dynamical core “model”, e.g. “cam-fv”, the scripts in cesm#_# will handle:

Here is a list of steps to set up an assimilation from scratch, except that it assumes you have downloaded DART and learned how to use it with low order models. Some of the steps can be skipped if you have a suitable replacement, as noted.

Strategies for generating an initial ensemble from which DART can start.

Note that start_from_restart is false (“don’t start from a pre-existing *ensemble*”), but a restart file (filter_ic) is still needed for filter to have something realistic to perturb. pert_names specifies which fields will be perturbed. CAM field names are used. pert_sd > 0 allows each point of the pert_names fields of each ensemble member to be randomly perturbed with a standard deviation of pert_sd. Other fields can be used, but moisture variables are tricky because of their variation with height by orders of magnitude. Regardless of which fields are specified, the spin-up period will allow the fields to come into balance with respect to the model, so the perturbations will propagate into all fields.

CESM’s short term archiver (st_archive) is controlled by its env_archive.xml. DART’s setup scripts modify that file to archive DART output along with CESM’s. DART’s output is archived in $arch_dir/dart/{hist,rest,logs,…}, where arch_dir is defined in setup_{hybrid,advanced}, hist contains all of the state space and observation space output, and rest contains the inflation restart files.

The cam-XX assimilate.csh scripts also make a copy of the obs_seq.final files in a scratch space ($scratch/$case/Obs_seqs) which won’t be removed by CESM’s long term archiver, if that is run.

There are, no doubt, things missing from these lists, so don’t struggle too long before contacting dart’at’ucar.edu.

How does DART interact with CESM?

The CESM climate model comes with its own configuration, build, run, and archive scripts already. The DART distribution supplies a ‘setup’ script that calls the CESM scripts to build a new case, and then add a section to the CESM run script so the DART code will be run after each CESM model advance. The DART setup scripts are needed only when building a new case. At run-time the CESM run scripts are used to start the job. The CESM “multi-instance” capability is used to run multiple ensemble members as part of a single job.

I want to assimilate with one of the CESM models. Where do I start?

I’m getting a mysterious run-time error from CESM about box rearranging.

Certain versions of CESM (including CESM1_5_alpha02d) won’t run with 3 instances (ensemble members). We are unsure what other instance sizes fail. The error message is about box rearranging from box_rearrange.F90. This is a problem in CESM and should be reported via their Bugzilla process. 4 instances works fine.

I’m getting ‘update_reg_list’ errors trying to assimilate with POP.

If you are trying to assimilate with POP and you get this error:

The most likely cause is that the POP-DART model interface code is trying to read the POP grid information and the default file is in the wrong kind of binary for this system (big-endian and not little-endian). At this point the easiest solution is to rebuild the DART executables with a flag to swap the bytes as it is reading binary files. For the Intel compiler, see the comments at the top of the mkmf file about adding ‘-convert bigendian’ to the FFLAGS line.

I’m getting asked to confirm removing files when CESM is built.

I’m getting module errors when CESM is built.

DART only uses the plain netCDF libraries for I/O. CESM can be configured to use several versions of netCDF including PIO, parallel netCDF, and plain netCDF. Be sure you have the correct modules loaded before you build CESM. If there are questions, try setting up a CESM case without DART and resolve any build errors or warnings there before using the DART scripts.